The Master Chefs
The Master Chefs
Taking time out from filming the next series of MasterChef: The Professionals, Michel chats to James massoud about accolades, 45 years of Le Gavroche and Eric Cantona. 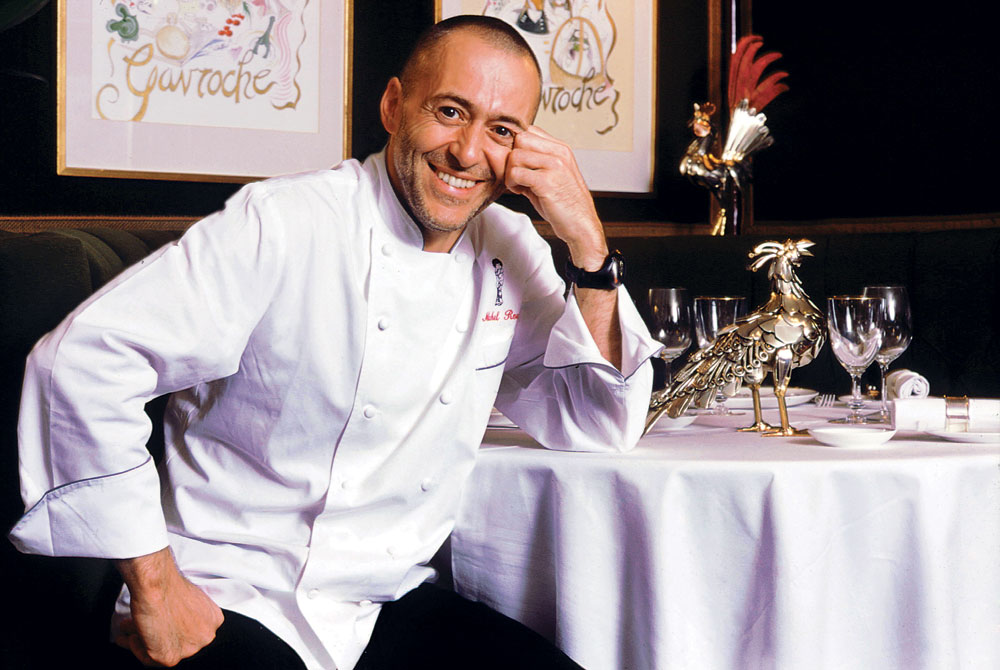 Taking time out from filming the next series of MasterChef: The Professionals, Michel chats to James massoud about accolades, 45 years of Le Gavroche and Eric Cantona.

WHAT IS YOUR FAVOURITE DISH, TO COOK AND TO EAT?

My god that’s a tough question to answer! When people have asked me this question before, I always say roast lobster with garlic butter and fat chips. I love lobster and I suppose baked or roast lobster would be ideal. In terms of cooking, it would have to be on a barbecue at my house in the south of France or on an island with a nice beach, so the location is important as well.

AS A CHEF, DO YOU FEEL A RESPONSIBILITY TO PROMOTE SMALL, ARTISAN PRODUCERS?

Most definitely. Sustainability is high on the agenda. We do hunt out small farmers, holdings and producers, and where possible we use them. The difficulty is, of course, using them as a constant source. For example, if somebody knocks on my door delivering two or three pieces of lamb, which are beautiful and perfect, I can only use them on a specials menu, I can’t put them on permanently because it’ll never be the same. There’s a particular biodynamic farm in Dorset called Heritage Prime. Their produce is quite extraordinary and I take anything and everything, from eggs to chickens, turkeys, hogget lamb, pork and a bit of beef. They don’t produce masses, but what they do produce is fantastic.

LE GAVROCHE CELEBRATES ITS 45TH ANNIVERSARY THIS YEAR [2012] – WHAT HAS BEEN THE MOST MEMORABLE OCCASION IN THE RESTAURANT’S HISTORY, FOR YOU?

It’s difficult to say if there’s any particular one that has stood out from the other. I think my biggest reward is after service every day to go and see the customers and to see them happy. Seeing customers on their way out and booking a table for the next time is very rewarding. Much more so than any accolades given to us by journalists or food critics.

YOU RECENTLY WON THE TATLER LIFETIME ACHIEVEMENT AWARD. HOW DID IT FEEL TO BE PRESENTED WITH SUCH AN ACCOLADE?

I was obviously overjoyed. But, Lifetime Achievement Award, I’m 52, I’ve still got far more to achieve! But it was very nice and it was a lovely evening. I had a nice glass of Laurent Perrier to celebrate. Just the one mind because I had to go back to work, believe it or not.

WHERE DO YOU KEEP YOUR AWARDS?

Over the years we’ve gleaned many awards. That particular one is kept at home. It’s a beautiful glass chiller, which I’m probably going to use as a vase. We keep some of the awards in the restaurant as well.

YOU’VE COOKED FOR PRIME MINISTERS AND A-LIST STARS, WHO HAVEN’T YOU COOKED FOR THAT YOU WOULD LIKE TO IN THE FUTURE?

Eric Cantona, being a Man United fan. He likes his food and he is just such a legend.

ARE YOU LOOKING FORWARD TO THE NEXT SERIES OF MASTERCHEF: THE PROFESSIONALS?

Very much so. We’ve started filming already. I’m expecting some great things and there are some fantastic chefs. Every year it just seems to get better.

DO YOU HAVE ANY OTHER TELEVISION SHOWS IN THE PIPELINE?

Yes, I’m doing an hour-long documentary for BBC Four on [Auguste] Escoffier, the great French chef. It’ll be about his life and how he made his mark in London, at The Savoy, The Carlton and The Ritz. The programme will summarise his legacy.

Talking of legacy, the Good Food Channel will be screening the Roux Scholarship and I’m also championing strawberries for the Great British Food Revival.

WHICH IS YOUR FAVOURITE RESTAURANT IN THE WORLD?

El Celler de Can Roca. Founded by the three Roca brothers, it’s in Girona, north of Barcelona. The food is great, that’s a given, but what is extraordinary about the place is the lovely warmth and the aura that you feel because it’s run by the three brothers. I went for the first time last year and have been three times since.

WHO WOULD BE YOUR IDEAL DINNER PARTY COMPANIONS?

Other than Eric Cantona, I’d also like Chris Robshaw, the new England rugby captain. He was voted Harlequins’ Player of the Year this year, which is a fantastic achievement. He’s such a charming guy. And my third choice would be Paul Bocuse, the granddaddy of French gastronomy. It would be lovely to see him and raise a glass with him.

IF YOU WANTED TO HAVE A NIGHT OFF, WHO WOULD YOU HAVE COOK FOR YOU?

Cook for me? There aren’t many people I could trust! I wouldn’t mind my daughter, she could cook for me. That way I could see how she’s progressing [Michel’s daughter, Emily is training to become a chef in Monaco at the the Louis XV-Alain Ducasse restaurant].

WHAT WOULD YOU HAVE ON THE MENU?

I love Alain Ducasse’s Rhum Baba so if she could replicate that I would be very happy.

WHERE IS YOUR FAVOURITE HOLIDAY DESTINATION?

Anywhere in the Indian Ocean. I love the weather obviously, but the people as well. Be it the Seychelles, Mauritius or in the islands of the Maldives, it’s just a wonderful destination to go to. I try to go once a year if possible.

WILL YOU BE HOLIDAYING ANYWHERE THIS SUMMER?

Unfortunately I won’t be able to make it to the Indian Ocean in the summer, but I will try to get out there in November. At the end of July/beginning of August we will be heading to France.

DO YOU PREFER RELACING BEACH-TYPE HOLIDAYS OR THE THRILL-SEEKING ADVENTURES?

I like both. I like to chill out on a beach and read a book because I don’t get enough time to read as much as I’d like to, but I also enjoy the cultural side of holidaying. So if I’m staying in a city, for example, then I like to explore the sights and visit museums.

WHAT’S THE ONE ITEM YOU ALWAYS PACK?

My trainers, always. I enjoy running and they’re ideal to have when exploring.

WHAT IS YOUR FAVOURITE BOOK?

At the moment I’m reading an autobiography by Harvey Thorneycroft, who was a rugby player that played for the [Northampton] Saints and for England. It’s really intriguing because it’s set around that moment in time when rugby changed from amateur to professional, and he’s got a real insight into it. He’s got some lovely stories to tell, which makes it a really interesting read. I do enjoy reading autobiographies. The Alex Ferguson one was great. I tell you one book I couldn’t put down – Cod by Mark Kurlansky. It’s about how cod shaped the world we live in now. Even for those who are not interested in food, it’s a great read.

I like Quentin Tarantino films; Reservoir Dogs, Pulp Fiction, Kill Bill, they’re pure escapism. They are gory, bloody and horrible, yes, but there’s actually a story to them and there’s a lot of dark humour. I just love the way he directs his films.

I’m a big [Pink] Floyd fan. Heavy metal as well; [Deep] Purple, [Led] Zeppelin, I’ve got them all. In fact my ringtone is one of Zeppelin’s songs!

At the moment I am collecting a few drawings from Rachel Goodyear. She’s based in Manchester and she does some beautiful drawings – black and white illustrations with flashes of red, they’re stunning. Each drawing tells a story and I think art should tell a story.

YOUR HOUSE AND CAR ASIDE, WHAT IS THE MOST EXPENSIVE PURCHASE YOU’VE EVER MADE?

Probably wine or art. [Michel consults David Galetti, Le Gavroche’s head sommelier] David, how much would you say a case of Yquem ’67 would cost? [David’s response: More or less £12,000]. So it would be the art!

HOW DID IT GO IN THE LONDON MARATHON FOR YOU EARLIER THIS YEAR?

It went alright. The last couple of miles were a bit painful, but I got through it in under four hours.

WHY DID YOU CHOOSE VICTA (VISUALLY IMPAIRED CHILDREN TAKING ACTION) AS YOUR CHOSEN CHARITY?

l’ve had issues with my eyes and have had several operations; detached and torn retinas. It’s just a way to give back to children, especially those who are partially sighted or blind.

WILL YOU BE WATCHING THE OLYMPICS?

I’m over the moon that London won the Olympics and I think it’s fantastic for the city. Yes, there are going to be issues with traffic and travel, but let’s just enjoy it. Businesses such as hotels and restaurants will benefit, but I believe everybody is going to do well out of it. It’s going to provide a huge feel-good-factor. London is being showcased, which is an immense privilege.

WHAT ARE YOUR PLANS FOR THE REST OF THIS YEAR?

Hopefully I’ll be starting work on a new book. Not my autobiography though, I’ve got lots more to achieve before that!