The Master Chefs
The Master Chefs
Fresh from filming brand new Michel Roux TV shows, Michel took time out to tell James Massoud why he’s flying the flag for strawberries, how his hero Escoffier was involved in a shocking scandal and why he’s so scared of Monica Galetti. 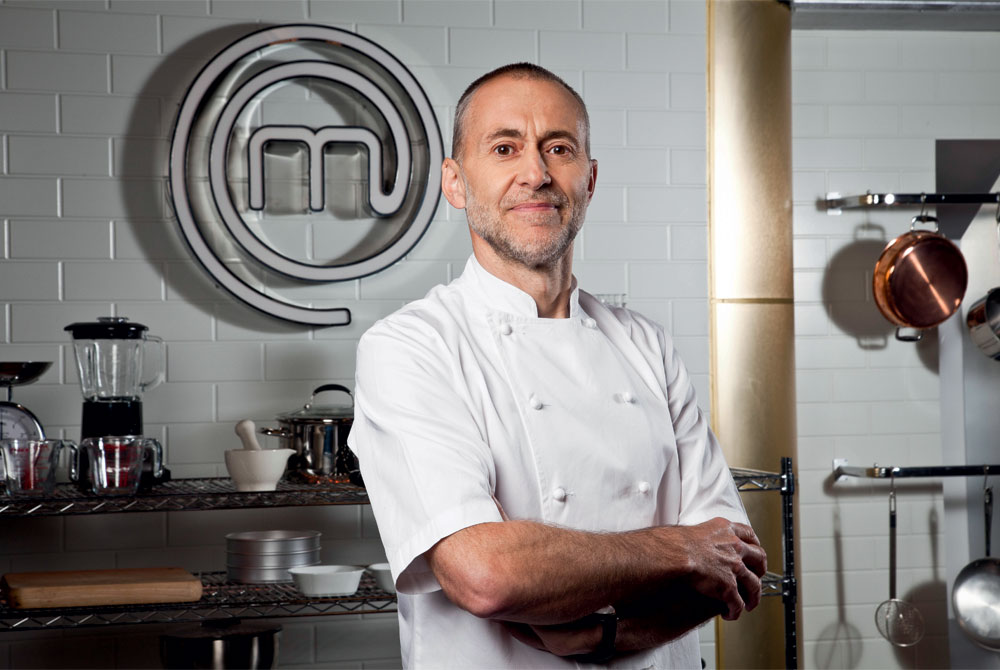 Fresh from filming brand new Michel Roux TV shows, Michel took time out to tell James Massoud why he’s flying the flag for strawberries, how his hero Escoffier was involved in a shocking scandal and why he’s so scared of Monica Galetti.

IN THE 2011 SERIES OF THE GREAT BRITISH FOOD REVIVAL YOU CHAMPIONED PEARS. WHAT DID YOU CHAMPION IN 2012 AND WHY?

Strawberries. I’ve opted for strawberries simply because I was born in Kent and they’re a popular Kentish fruit. Strawberries on offer in Britain, especially in supermarkets, always seem to be the same variety, and that’s the Elsanta. When you buy these strawberries they tend to be watery and tasteless, so on the show we try to find out why and look at how we can change that. There are other varieties and if you shop around you can find some tasty alternatives. It’s good to see more growers and supermarkets now working towards that.

AND YOU’VE GROWN YOUR OWN STRAWBERRIES…

Yes, the white ones. They’re wild strawberries, but they’re albino white. They taste just the same as the red ones.

WHAT DID YOU GAUGE FROM THE RESPONSE TO THE LAST SERIES?

There was a fantastic response! People went out and bought pears, knew when they were ripe and knew how to cook them. They had a better understanding of them, and realised that British pears are as good, if not better, than imported pears. I hope this series can do the same for the different varieties of strawberry.

DID YOU LEARN ANYTHING WHILE MAKING THIS SERIES?

I couldn’t believe how much actual work goes into the seedling of the strawberries and trying to find new varieties. I also visited the East Mailing Research Centre where they cultivate new varieties, which was really fascinating.

ARE YOU NOW SOURCING PRODUCE FROM ANY OF THE ARTISAN PRODUCERS YOU VISITED?

Funnily enough, we were already using one of the Kent strawberry growers.

YOU’VE MADE A SHOW ABOUT AGUSTE ESCOFFIER, WHY IS HE SUCH A HERO TO YOU?

He’s the granddaddy of French gastronomic cuisine and a food hero, so it was interesting to delve into the history of Escoffier. We only scratched the surface to see what part he played in England as a forerunner to the grand hotels: the Savoy, the Ritz, the Carlton to name but a few. He was the first celebrity chef.

WHAT DID YOU LEARN FROM FILMING?

That he had been naughty! He was a bit of a womaniser and I suppose his wife did forgive him in the end, but the shocking revelation for me was that it was confirmed that he had allegedly stolen money or embezzled the Savoy.

HE WAS INDEED FIRED FROM THE SAVOY AFTER EIGHT YEARS BECAUSE OF THAT. WHAT’S YOUR VIEW OF IT?

I find it very hard to believe.

HOW HAS HE INFLUENCED YOU IN YOUR WORK?

He influences all chefs through his book. He wrote several books but his Le Guide Culinaire is used as a cornerstone for all classics. Thanks to him we [chefs] are dressed in chef’s whites, we are smart, we have respect. He was the first one to install that respect in chefs.

HOW WAS THE EXPERIENCE OF LUNCHING WITH HIS GREAT-GRANDSON, MICHEL ESCOFFIER?

That was great fun. He had lots of old photos to show me, lots of stories and anecdotes, which were very interesting. I really enjoyed it.

WHAT WAS IT LIKE WORKING WITH HISTORIAN KATE WILLIAMS AND FOOD JOURNALIST PAUL LEVY?

I’ve met Paul Levy before, he’s a respected food writer and food columnist, and he actually saw the papers that proved Escoffier was sacked and that he didn’t leave of his own accord. Kate is a great historian; she knows her stuff. It was hard work making the show, but good fun.

FOOD AND DRINK IS RETURNING TO THE BBC IN 2013. TELL US MORE.

There’ll be six episodes, starting in January. It’s full of great stuff; I’ll be cooking two recipes per show, and there will be a wine expert, a lady whose name shall remain tightly under wraps. She’s a fresh face, somebody new to television, which is great. She’s very down to earth and is able to ask the questions that the viewers would like to ask. We’re not just doing wines; we’re doing beers and different beverages as well so it’s not too haute or pompous. It’s much more accessible to the viewer, which is important. The recipes are also very doable, but still inspirational, and the whole programme will be more conversational and relaxed. It’s totally modernised. As much as we loved the last one it was a little bit too formal, too staged. At the end of the day it’s all about enjoyment. And there will be guest chefs too.

WHAT’S IN STORE FOR THE NEXT SERIES OF MASTERCHEF?

It’s another great series. Every year we wonder how on earth we will top that and get a better winner, yet we do. Every year it reaches a higher calibre. It’s a tough competition. This year is certainly another humdinger.

YOU WERE INVOLVED IN MASTERCHEF SOUTH AFRICA, HOW WAS THE EXPERIENCE?

Oh it was amazing. Unbelievable. They contacted me and asked if I could go out there, and I said yes I’d love to, any excuse to go out to Cape Town. It was a guest appearance at the end of the show. By then there were six chefs left and I had to do a master class and set them a task, which was amazing. The task was one of the dishes that we have on the menu here [Le Gavroche], the artichoke dish – Coeur d’Artichaut “Lucullus” [Artichoke filled with Foie Gras, Truffles and Chicken Mousse]. They had to replicate it.

MONICA ‘THE HATCHET’ GALETTI PARTICIPATED IN RUMBLE IN THE KITCHEN, A CHARITY BOXING MATCH. HOW DID THAT GO?

Poor Penny Mallory, Monica broke her nose! I’ve always been scared of her. She did well and she won. They initially approached me to take part but I can’t because I’ve had two torn and detached retinas, the kind of injuries that boxers get, so it was too risky for me to participate. I was part of the event though. I provided some food on the evening in support of the charity. There was a smattering of celebrities and personalities; Graeme Le Saux was there and David Haye too, cheering us all on, so it was great. I think the event very nearly raised £60,000. The RAC were very generous with their support. It was properly done; they built a ring in the club and they had all the backroom staff and ambulance crew. We’re hoping it’ll become an annual event now where it grows bigger and bigger, attracting even more high profile chefs. I’d love to see Tom Kerridge in there, he’d be great. But who would you pitch against him because he’s such a big bloke?

WHAT CAN PEOPLE EXPECT FROM THE NEW COOKERY SCHOOL, CACTUS KITCHENS?

I could not be more excited about the launch of Cactus Kitchens. It will be the ultimate cookery experience – learning to cook dishes with some of the UK’s finest chefs, within the state-of-the-art kitchens built at the Saturday Kitchen TV studios. It will be truly unique and I can’t wait to get started.