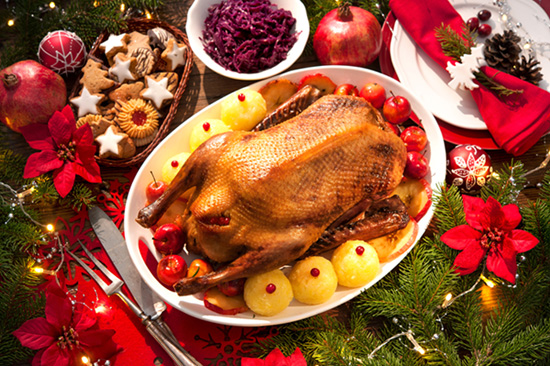 Decorating fir trees, cooking up batches of mince pies and sending greeting cards to our nearest and dearest; many of these British Christmas traditions have fascinating histories dating back hundreds of years. From medieval to modern-day times, Festive Feast will take you on a journey through the different ages of Christmas.

This era is responsible for the introduction of light, fire and evergreens to our festive celebrations. In Pagan times, evergreen plants were valued for their ability to stay alive during the cold winter months. Holly and ivy were used to celebrate the winter solstice and gave homes a splash of colour. In medieval times, societies used to cheer up dark days with celebrations of light and fire. The Yule log, a custom in many European countries, was ceremoniously placed in the fireplace on Christmas Eve, lit with the previous year’s log and burnt continuously for the Twelve Days of Christmas.

The Elizabethan period gave rise to festive banqueting. For families who could afford it, Christmas culminated in impressive spreads of sweet and savoury delights—an ostentatious display of wealth and status. Sugar, a particularly expensive ingredient at the time, was present in most dishes and foods were designed to deceive the eye. ‘Collops of bacon’—a great favourite—were made from ground almonds and sugar. Other popular items were walnuts and any foods made from sugar-plate—a substance consisting of egg, sugar and gelatine. All of this was accompanied by spiced wines and syllabubs.

In 1644—at the height of Puritan England—an Act of Parliament banned Christmas celebrations, which many viewed as an excuse for excess. The restoration of the Monarchy in 1660 brought with it a more openly festive spirit; old customs were revived and Christmas was once again celebrated as a religious and social festival. Through the written accounts of Samuel Pepys, a civil servant, we now know that by 1666, Christmas traditions already involved mince pies, shoulders of mutton, roast chicken and ‘good wine’. Attending theatrical productions, playing music and visiting friends and family was also mentioned.

Queen Victoria and Prince Albert were great advocates of Christmas—thanks to them the glittering fir tree is one of the main symbols of this holiday. Although the Christmas tree custom originated in Germany, Prince Albert is credited with making it popular and spreading it beyond Royal circles. Usually decorated with wax candles, sweets, flags and little ornaments, these trees were generally displayed on tables in pots with gifts underneath.

The Victorian period also brought with it the ‘invention’ of Christmas crackers and greeting cards. In the 19th century, a confectioner’s apprentice in London spent years developing the French bon-bon into the modern-day cracker. Sir Henry Cole, driven by the amount of correspondence he felt obliged to write, created the first Christmas card in 1843 and engaged a friend to design the first coloured lithographs. The lowering of postage rates contributed to the spread of this custom. Popular designs featured Father Christmas, robins, snow scenes and evergreens.

In medieval England, Father Christmas merely represented the spirit of good cheer. It wasn’t until the late 19th century that he became the legendary gift-giver he is universally known as today. This is, in part, due to Dutch influences and the legend of ‘Sinterklaas’, who became known as Santa Claus.

By this time, the range of gifts for both children and adults increased dramatically. Much like today, the streets of London were filled with shoppers in the days leading up to Christmas. Manufacturers and shopkeepers capitalised on this; Gamages, a famous department store in London at the time, offered 500 pages of gifts in their 1913 catalogue. Some of these presents were put under the Christmas tree while others were left in stockings.

Though money was tight for most during the war, the spirit of Christmas remained strong—even if the festivities were a reduced affair. The war made shopping trips and family gatherings both difficult and dangerous. This period saw a rise in popularity of homemade decorations, tinsel and artificial trees. Rationing and the lack of everyday ingredients meant that food preparation required imagination.

Magazines like Ideal Home and Good Housekeeping made hosting dinner parties a must during the festive season. During the 1950s, the pressure to produce a perfect Christmas dinner and several days of meals and snacks was enormous—much like it is today. Cocktail parties became the ‘in-thing’, as did inventive nibbles and hors d’hoeuvres. τ

Learning to cook with James Martin

Prepare for Christmas with Seasonal Produce 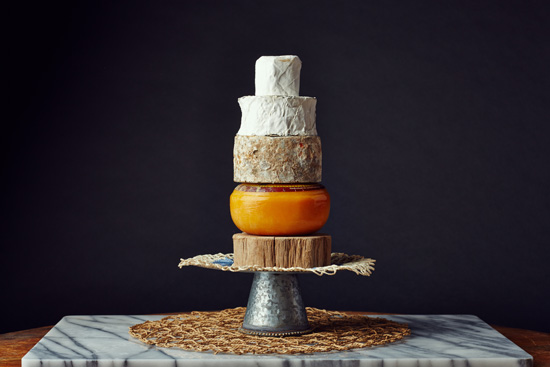