The Master Chefs
The Master Chefs
Vivek Sigh, celebrated chef and founder of London’s revered Cinnamon Club, is at the forefront of modern Indian cuisine. His hefty career has seen the release of five cookbooks and a regular spot on the BBC’s Saturday Kitchen. 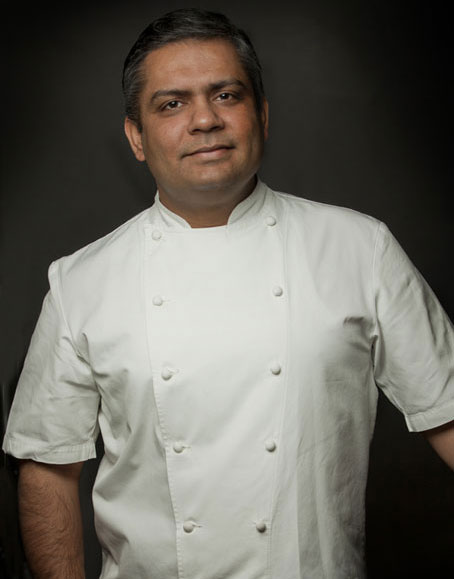 Vivek Sigh, celebrated chef and founder of London’s revered Cinnamon Club, is at the forefront of modern Indian cuisine. His hefty career has seen the release of five cookbooks and a regular spot on the BBC’s Saturday Kitchen.

Vivek Singh grew up in a coal mining community called Asansol in West Bengal where food was at the centre of everyday life. Instead of following in his father’s footsteps and becoming an engineer, Singh realised that his true desire was to cook professionally. From 1990 to 1993, Singh attended a catering college in New Delhi where he was selected out of thousands of applicants to join the Oberoi Centre for Learning and Development—a hotel management school in India. After being classically trained with the Oberoi Group for three years, he developed his career in The Grand Hotel in Kolkata. Eventually, Singh made his way to London and opened his first restaurant with Iqbal Wahhab, The Cinnamon Club, in 2001. Located in a prime location only a stone’s throw away from the Houses of Parliament, the establishment offers an exciting menu of intricately balanced Indian flavours. Due to the restaurant’s resounding success, Singh went on to open a city venue in 2008 and another one in Soho in 2012. Singh and Wahhab agreed that their restaurants would apply French techniques to Indian cooking. While Singh likes to draw upon traditional Indian flavours, he also believes that dishes within the cuisine shouldn’t remain static. Instead he strives to adapt to new trends, ingredients and demand so that his creations are daring and up-to-date.

In 2008 Singh was asked by Virgin Media to create the world’s hottest dish to commemorate the launch of their Bollywood movies channel. The dish made it into the Guinness Book of World Records, despite various curry houses contesting that a dish of their creation was hotter. The dish became known as the Bollywood Burner and was sampled by Jonathan Ross on his popular Friday night show.

Singh makes regular television appearances on the BBC’s morning show, Saturday Kitchen—establishing him as a recognised food personality to the public. In 2015, Singh was awarded an honorary doctorate of letters from Warwick University for his significant contribution to London’s culinary landscape.

If you enjoyed reading our interview with Vivek Sing, check out the digital edition of World Food Tour here where you’ll be able to find other interviews with well-known chefs as well as plenty of recipes.