The Master Chefs
The Master Chefs
With a place among the best chocolatiers in the world, Paul A. Young’s chocolate creations have won several awards. Young is now the proud owner of three chocolate shops in London. 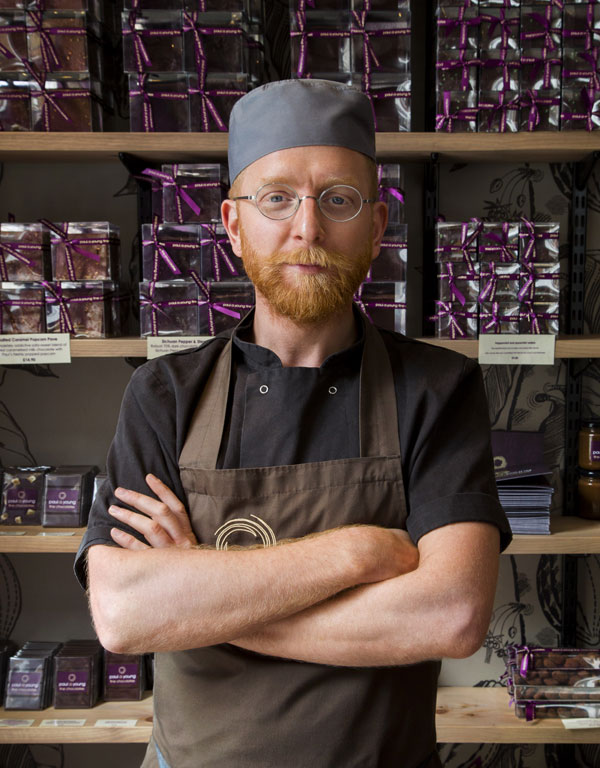 With a place among the best chocolatiers in the world, Paul A. Young’s chocolate creations have won several awards. Working alongside Marco Pierre White as head pastry chef at Quo Vadis and Criterion in his early career, Young is now the proud owner of three chocolate shops in London.

Paul A. Young was born in Yorkshire and raised in Country Durham. After being accepted into an art college in Hartlepool, Young soon changed his mind and decided to embark on a career in the food industry. He completed a foundation course in catering at New College, Durham before moving on to study at Leeds Metropolitan University. Young quickly worked his way up through the ranks to become the head pastry chef at Marco Pierre White’s restaurants in London, Quo Vadis and Criterion.

In 2006, Young and his business partner, James Cronin, opened their first chocolaterie in London’s Islington area. That year, the store—which traded as Paul A. Young Fine Chocolates Ltd—was announced as the Best Chocolate Shop by the Academy of Chocolate. Since then, Young and Cronin became honorary board members of the academy for which membership is no longer open. Young’s second chocolate shop opened in 2007 and is located in the Royal Exchange in the heart of London. This was shortly followed by a third establishment in Soho in 2011. Young added a fourth stunning flagship store in 2013 on Tottenham Court Road.

Young endeavors to incorporate fascinating flavours and taste combinations into his sweet treats. Strawberry and pink peppercorn, cigar leaf caramel and Glennfiddich 15 year old solera and Seville orange marmalade are just a few examples of his ingenious pairings. Many of his imaginative creations have earned him critical acclaim within his field. Young doesn’t shy away from trying controversial concepts: his marmite truffles, in particular, drew a huge amount of media attention and debate.

Young has steadily become a recognised face on national television. After making appearances on BBC’s Blue Peter, Great British Bake Off’s wedding cake special, Paul Hollywood’s Pies and Puds, Heston’s Great British Food and Channel 4’s Sunday Brunch, he has established himself as the ultimate source of knowledge on everything chocolate-related. In 2009, Young published his book: Adventures in Chocolate, which is filled with inspiring recipes for those with a sweet tooth. It was met with high praise from critics and home cooks alike.

Catch our exclusive interview with Paul A. Young where he discusses the importance of experimenting with unusual flavours and his source of inspiration.

If you enjoyed reading our interview with Paul A. Young, check out the digital edition of World Food Tour here where you’ll be able to find other interviews with well-known chefs as well as plenty of recipes.